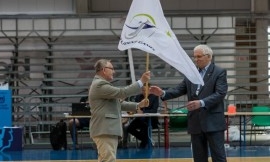 On the 11th of April 1923 I Tartu Student Unions of Finland, Estonia, Latvia and Lithuania formed a program of cooperation. One of the parts of this program foresaw that student sports games be held on a regular basis. In autumn of 1923 in Tartu the first Baltic Students Olympics were held. The students competed in field athletics, tennis and football. Later those Games were named SELL Games by the first letter of countries.

Winter Games were started in 1929. Later, beginning with the year 1937 the SELL chess matches were held there. The last pre-war SELL Games were held on the 2-3 of March 1940 in Otepe (Estonia). For over 50 years the Games were disrupted because of the Soviet occupation of the Baltic countries.

On the 21st of April of 1997 representatives of Finland, Estonia, Latvia and Lithuania signed a declaration about the revival of the SELL Games. It was decided the 15th SELL Games to be held in Tartu (Estonia). Students from all countries throughout the world were invited to participate in the Games. Over 800 athletes from 15 countries representing 52 universities took part in these Games.

SELL Games is the biggest University Sport Games in Baltic countries and Finland which takes place every year. The games are rotating every year in one of these countries.

How to find us